It has been awhile since I blog about my #RunforFood regiment. The ritual to run for food is still going strong, and in fact, I do find myself improving in my fitness over the last few weeks. In May, I managed to catch a few runs while I was on business trip to Geneva, Switzerland. It was a fantastic weather (under 15 deg C!) to run! In June, I continue my running regiment, and augment with cycling and swimming to combat the hazy weather.

A couple of under 30 min 5km run in June proves that the timings are not a fluke.

Since I accomplish my 10km goal two weeks ago, I went on to set a new goal, which is to complete 15km by 31st July. While this means I have 4 months to prepare myself for this stretched goal, I know the extra 5km will be a lot more challenging than what I have overcome in the last 4 months.

So I try to complete at least one 10km run every week. Earlier this week, I was hoping to push myself to do a 11km run, although mentally I merely conditioned myself up for just a 10km run. Eventually I could only complete 10.5km distance, which goes to show how (lack of) mental strength can influence one’s ability to complete a task.

Then two days ago, I decided I would stick to a 60 minute run but with a relatively faster pace (anything less than 7 min/km for a 60 minute run is considered fast at this moment for me :P) It was  a good workout, as I managed to maintain an average pace of 6.49min/km (excluding the first 5 minute of slow warm up jogging). Probably one of the fastest pace I had, if not fastest, for the distance I was going through.

Today, I decide to try for the 11km distance again. I plan my route carefully so that it will be mostly flat ground for most part of the run, and also keep the run within East Coast Park as much as possible.

I start the run at a decent pace (7:08 min/km) but gradually slow down to an average of 7:25-7:30min/km as I know I cannot afford to “puncture” at the early stage of the run. The 4km run to East Coast Park en route Mountbatten and Tanjong Rhu Road is therefore easy. Physically I feel I am still in splendid condition so the entire 4km run along East Coast Park remains relaxed. (In retrospect, I could have increased my pace to 7:10-7:15min/km …)  Nevertheless, I do start to feel the strain coming on my two ankles as I reach the 6-7km, despite wearing a Phiten Titanium ankle brace on my left ankle. Thankfully, the strains remain to be just a small niggling pain and do not interrupt the run.

The 8th km is a difficult one though, particularly because I have to run across the highway via the overhead bridge.  Every time I reach the other side of the highway, my heart beat would usually jump up by 10, given the elevation I have to go through.

With just 2-3km away from my planned destination, it does spur me forward. Sometimes, you just need to constantly find the right motivation to keep you going. 🙂 In the last 2km, I pick up my pace and accelerate gradually. I find that I am not struggling despite the acceleration, so now my challenge is to extend such accelerated pace for another 1km in my subsequent runs! Finally, by the time I hit my planned destination mark, I complete the entire 11.01km route. Another milestone to my 15km goal has attained!

As of 20th April, I have completed 71 running activities, and 393.98km. Specifically, this week I have completed a total distance of 30.64km, by far the furthest I have covered within a week. Guess what’s the reward for this accomplishment feat?

After all, that’s the whole motivation behind each run — “Run for Food”  🙂

It has been slightly more than a month since I started my maiden run. Today (27th Jan), it’s a milestone as I complete another run. I have run 29 times, covering 100.64km. How many more 100km will I run again?

After running “aimlessly” in the last 10 runs, I decide that I need to have a proper running schedule to be effective. After some (google) research, I adopt the schedule published by Runners’ World, an 8 weeks plan to complete a 5km race.  I tweak the schedule further though. Since I have already had some head start with some running in the past weeks, I skip the “1 minute run, 5 minute walk”, and go straight into the “2 minute run, 4 minute walk”. On the side note, I import the running schedule into the Runkeeper app, which turns into a coaching tool, rather than just a time watcher. Neat!

The first run, guided through the formal schedule, was motivating. The run is essentially made up of 5 repetitive shorter run, with short walk break in between to overcome the huff and puff. Thus, the 30 minutes session was never anywhere breathless and draggy as before. By the 2nd week of the formal training, I move to the next stage of the schedule, i.e. “3 minute run with 3 minute walk”. It’s also the first time I break the 4km mark (although with walk break in between). That spurred me on further. By the end of the 2 weeks running schedule, I progress to the 3rd stage, which is “4 minute run with 2 minute walk”. In those runs, I was constantly pushing myself to run 4.2 to 4.5km, but I learn later that this is actually counter-productive to my running plan. (More about this later)

On 14th Jan 2012,  I completed 4.14km, at a pace of 7.32 min/km. That marks the completion of 17 runs, or 51.85km since 15th Dec 2011. A month has gone, and I do feel much lighter than when I first started. I was joking about this; If I felt like I was carrying a fullpack then (given my weight at that point), I must be running with SBO now. Certainly, I feel fitter as well, although probably just 5% of my fittness level 20 years ago. The question now is, will I continue this running habit, or will it be shelved a side once my hectic work schedule is back.

I told myself, think about the food. Hopefully the run continues 😉

Polar RS300X comes with a trademark Wearlink+ heart rate monitoring technology chest strap, a transmitter, and a watch that receives and records the data from the transmitter. As I discovered later, while RS300X monitors  the heart beat constantly, it does not log all the raw data, but only aggregated data. What it means I would not be able to plot out how my heart rate fluctuates throughout my run, although I can tell my maximum and average heart rate, and the heart rate zone I am in during the run. It is not a big deal for me, at least for now, but for serious runner, I think a Polar RS400 or higher model range might be more suitable.

My first run with a heart rate monitoring device was revealing, and shockingly as well. My heart rate was at one point pumping at 180 beats-per-minute(above 90%), and average at 173. Running has become more scientific indeed (as when I was younger, I would just run and run). I noted that I was running at an unhealthy heart rate zone. Not only I am running close to my maximum heart rate (which is 185 beats-per-minute), it’s in a maximal or red line zone where I won’t benefit much as far as fat-burning is concerned.

By now (29th December 2011), I have completed 18.53km, over 8 runs. I knew the distance is nothing to shout about, particular to regular runners. But for someone who had not run for the last 10 years (or maybe even more), this is an amazing start, at least for me.

After my maiden run ended up torturous, I decided that I need to run more than just once a week. I knew I need to do more short run, instead trying hard to complete a long distance within a running session. The approach will also be kinder to my body I reckoned. So I began running on the alternate day. By the end of the second run, I thought my knees were giving way; Just imagine a tonne of weight bouncing on a pair of wooden stilts.  I decided to get some supporting gears (and proper running shorts and shirts as well!), and that marked the beginning of my running “investments”. By the fifth run, I had all my knees and ankles “covered” up with the Nike knee and ankle sleeves.

On day 10, I decided to time my run. By then, I already could feel the improvements in my breathing control and I would require fewer stops to complete the course. But the runs were getting  monotonous, so perhaps timing could help to motivate further. I ended using “Runkeeper” Android app to time my run, while at the same time listen to music using my 5 years old Motorola S9 bluetooth headset. My first official timing? 2.17km in 14:54 mins, or average pace of 6.53min/km. Obviously a far cry from my official personal best record (8:05 mins for 2.4km), but compared to my maiden run ten days ago, this is a big leap.

I never had formal training for competitive running until I got enlisted in the Army. Since then, I had the opportunity to represent my unit and formation in long distance run competitions. I was at my peak of my “running career”, and also participated in a couple of marathons (finished “leisurely” and back then, taking part of marathon was  never a fashion statement unlike these days)

Since I left as a civilian, I had not been maintaining my fitness level so  it plunged and crashed. At one point, I did spend a couple of months reshaping my fitness, but got seriously injured along the way. And the rest is history. 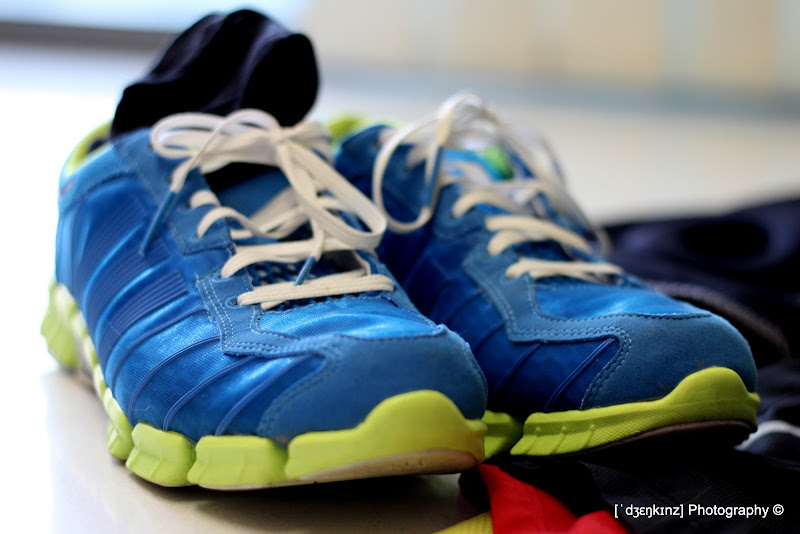 Fast forward to today, I could not walked briskly for 100m without huffing and puffing, let along complete a 2.4km run.  My fitness level was at the valley, while my weight was unthinkable. I seemed to fall sick easily too. As I approached the 40 years old mark, I told myself my lifestyle needs a makeover. For the last 18 months, we have been walking regularly as we would bring our Corgi furkid for a daily neighborhood walk or a weekend walk at the park . Then came the resolution recently that I need to pick up my running again.

So I dropped by Adidas store to get myself a pair of running shoes (I’m a sucker for the 3 stripes, tbh). I told myself I need to run at least once a week. But lo and behold, it turned out to be more than that.

On 15th December 2011, I started my maiden run since 2000. It was around 11pm, as I wanted to make sure the weather is cool and air is fresh.  Despite that, the run was a torture one. It took me more than 18 minutes (did not time, so no exact timing) just to complete a 2.2km. I had to stop my run multiple times during the course, just to catch my breathe and recover the fatigue. By the time I completed my session, I felt like as if I had done a marathon. That was how pathetic I was. Strangely, it did not demotivate me, and instead propelled me to increase the frequency of the run (strangely as well!).  And this is just the beginning …