Having swim for almost a month, I am convinced that I must have swimming as part of my exercise regiment, even after my foot fully recovers from the ligament sprain. For the last few weeks, I have been doing 40-100 laps of swimming, almost on a daily basis. With so many laps covered in every session, I had to have a method to track the laps. So I rely on rubber bands, an almost zero cost solution. Obviously I did not bring 40 or 100 rubber bands to the pool. While the solution is effective, I think an automated one is in order. 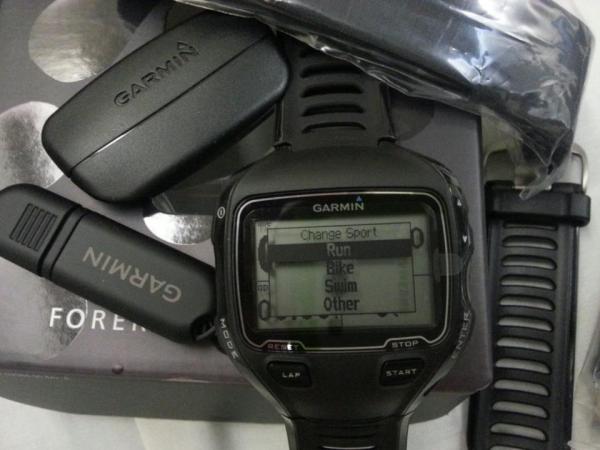 For a while I have been tinkering with the idea of getting Garmin Forerunner 910XT. I like the fact that it can be quickly released for bike mounting, and that it has a comprehensive activity tracking mechanism, probably even better than with my RunKeeper app and Polar HRM watch combined. I did not act on my tinker because I thought it will be an overkill (no, I’m not gunning for triathlon) while  convinced that Polar will do a far more accurate heart rate monitoring than Garmin. However, the recent increase in swimming activities led me to tilt and fast track my buying decision.

I went ahead to purchase one with quick release belt from GPS-Are-Us. Having used the fitness watch thrice in the last 3 days, once during a 60 min run, and twice on a swim, I have mixed feeling about my new gadget. 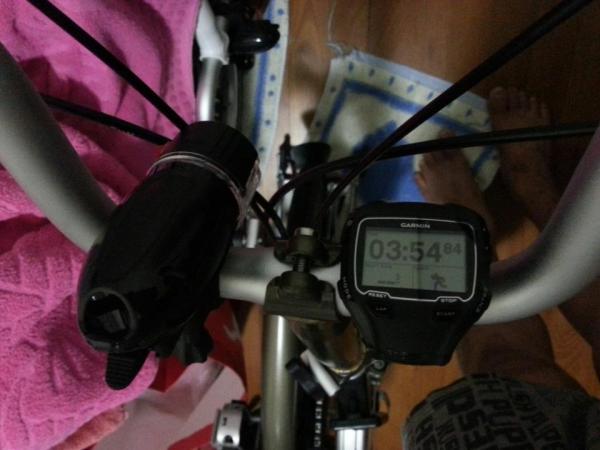 910XT mounted on my Brompton

I love the fact that now the watch can automatically count my swimming laps. When in lap swimming mode, the watch makes use of accelerometer to count the lap, determine and measure the swimming strokes (up to 4 different types of swimming stroke). There were inaccuracies in my first swim, where some laps  were miscounted but a firmware upgrade (from 2.5 to 2.6) seemed to have corrected the bugs. Coming from a GPS company, the Forerunner is also far more accurate than RunKeeper in measuring the running distance. With 5 different switch-able display screens (each capable of displaying up to 4 data fields), there are plenty of information for reference as I run. There is even a virtual pacer mode although I have not tried the feature yet. I love the quick release feature and it works just as expected. Having said that, I have not tried the watch on a cycling session yet, but I am looking forward to its rich data capturing and analysis just as I have experienced for running and swimming.

Firstly, huge disappointment creep in when I discovered that the device will not track heartbeat during swimming. I was hoping that I had misinterpreted, or a firmware upgrade could fix it. Unfortunately, the reality set in when I learnt that the inability to track heartbeat is due to the frequency used by Garmin. In contrast, Polar uses dual frequency (one for land use and one for submerging in water) and therefore I have no problem using it to track my heartbeat in the last few weeks. Forerunner 910xt is also not a watch for daily wear; The watch gets too bulky when fitted with the quick release catch and belt system. The watch also needs to be recharged, as frequent as daily especially if I do not turn off the GPS. Last but not least, it can only display time of the day, no date.

Data sync or firmware upgrade are done via the USB ANT.

From a data synchronisation and analysis standpoint, the device synchronizes seamlessly via my laptop to the cloud managed by Garmin. There are plenty of data for analysis, so I think that is one of Garmin’s biggest strength. The activities summary dashboard reports however are left much to be desired, given its lack of proper graph charting feature. There are some workaround though, as I have researched a few app (e.g. GarminSync, Fit2App) that could sync Garmin data to RunKeeper, which still offers the best health reports and charts in my opinion.