I blogged about how our Singapore boys lost to Haiti in the semi final of Youth Olympic Football game, a few days ago. 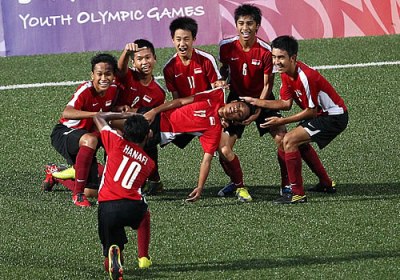 Earlier this evening, I went down to Jalan Besar stadium, to witness an exhilarating 3rd/4th playoff match between Singapore and Montenegro. The boys had earlier beaten Montenegro during the group stage, so like the Haiti match, they walked onto the pitch as a favourite. But I believe they have learnt the lesson of humility by now, given how they remained focus this time round to give a convincing 4-1 win over Montenegro boys. Their opponents are physically stronger and taller than them, but the Young Lion Cubs were unfazed with their trademark slick passing and technical skills.

What rolled my eye this time round is not Montenegro team, not the match officials, and definitely not the fans that were present in the stadium, who were great by the way. It is how some of our fellow Singaporeans think about the game. and I hope they are just minorities.  Here are some excerpts from the Yahoo! YOG Blog

Just what are we celebrating? Where’s Germany? Spain? Holland? Korea? Japan? The cubs line up against Papua New Guinea, Montenegro, Haiti…are these power houses of soccer? I think not. Yet, they choke against Haiti.

Give yourselves a pat on the back, for Haiti lost 9-0 to Bolivia and yet you couldn’t contain them. It could’ve been a blessing in disguise. Had you triumphed over Haiti, who knows what sort of trashing awaits you against Bolivia?

Lets hope you keep your feet on the ground. This medal means nothing given that soccer-strong nations were noticably missing to begin with.“

and then there’s another one

… Anywhere, there is nothing to shout about. There are only six teams in the Youth Olympic and Bolivia is the only outstandinng team with their good technical passes. There are no Brazil, no Argentina, no England, no Italy, no Germany, no France, no Spain, no Holland, no Uruguay, no Mexico, no Portugal and even Asian giant Korea and Japan are no in the line up. If all these team are in the Youth Olympic, where would Singapore stand???

Having read some of the criticisms about Singapore Youth Olympic, to be honest, I was expecting cynics and pessimists to spoil the party. But I can’t help thinking that some of these comments are a tad too much to stomach, let alone to be digested by a team of spirited boys.  There seems to be a group of Singaporeans who would only complain and criticize at every opportunity they can find, and appear to gain joy just by doing so.

To “critics” who want to compare us with the likes of England, Brazil or Spain;

The fact is, we are a young nation. When England won their first (and only) world cup (in 1966 fwiw), we were just barely few days away from celebrating our first independence day. When we think Spain as a powerhouse today, think about the struggle and challenges they faced in the last few decades (up till 2008).

If the boys had the same mentality as some of these “critics”, i.e.there’s no powerhouse (and therefore there’s no pride in winning the tournament), where would they be today? They would probably just “go through the motion” with a half hearted belief,  and ended up crashing out at the group stage. They might then do all the self-pity consoling stuffs, giving all sort of reasons why they cannot win.

But I’m glad the boys did not, and  hold on to the positive mindset, which the party-poopers are clearly not capable of. That they managed to overcome the Haiti setback to have a convincing win against Montenegro tonight, is even more commendable.

My parting words to the Young Lion Cubs, never stop believing and dreaming, as long as you work hard for it. If they do, we should applaud them for their sacrifice and determination, no matter whether they are successful in the end or not at the international level.