In the techie world, the ‘brick’ is usually associated to the state of your phone, where no matter what magic you try to apply, your phone  cannot be powered on at all. It is therefore no better than a high tech paper weight, or a brick if your phone happens to be one heavy phone.

Well, I thought my recently acquired Galaxy S was bricked yesterday.  It’s almost unthinkable that a surreal phone sitting in front of me was staring at me like a brick. I had previously flash a corrupted kernel or interrupted the flash process, in all cases, the phone will just show a broken flash icon when I tried to power up the phone. The phone was recoverable in every incident, since I could bring the phone back to the “download mode” (i.e. bootloader mode),  which allows me to re-initiate a firmware flash.

But not yesterday. I updated one part of the firmware, the flash process was successfully executed as indicated by the Odin flash application, and the phone was expectedly rebooted. But lo and behold,  the phone did not wake up at all after the reboot. It stayed powered down, no display, no sound, no sign of phone trying to “breath”. Not even an icon on the screen that says corrupted firmware. The phone did not even react when I attempted to put it back to the “download mode”.

Thinking that the phone has just coincidentally run out of battery, I decided to put the phone on charge but but it was still no go after few minutes. As I tried to recap what I have done, I realised that I had done something a noob would not have done. I had ticked on “re-partition” option prior to the flash process in Odin. Coupled with the fact that I was flashing the CSC image (one part of firmware that provides operator specific configuration and/or software).  Consequently, the phone had its entire system storage re-partitioned and end up with just that CSC code, without the remaining code, not even the kernel.

It was 1.30am at that particular moment, I reckon my sleepy head must be the reason behind this stupid action of mine.  What I couldn’t comprehend, is how can this screw up impact the bootloader, which is responsible for controlling the phone action during the boot up. One thing certain though is that I had completely woken up as a result.

For a good 15 minutes, I have been thinking all possible remedies, including removing the battery (albeit doing it very quicky) and putting it back to restart the phone.

I was almost resigned to the fact that my phone has become a $950 paper weight. But being a stubborn person (or one who perseveres, depending on how you look at it), I did not like the idea of throwing in the towel. I remembered how my father would spend the entire night till morning, just to fix some simple computer glitches when I was a young boy. I think I might be like him for that night.

Then I was enlightened. I observed that in those attempts when I was trying to put the phone into the “download-mode”, the phone might already be in panic-boot mode. While I had removed the battery and put it back to restart the phone, it was done so quickly that the state of the memory may not have totally erased. 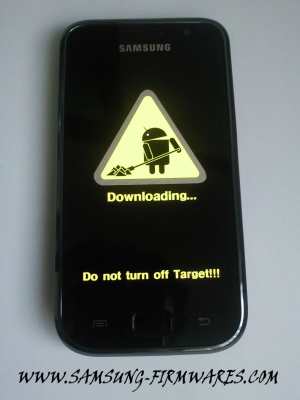 So there I went, took out the battery, left the phone for a minute, put back the battery, and powered on the phone into “download mode” right away. Lo and behold again, phone is alive again! I almost yelled with joy .

And the moral of the story?

Never do any “not for weak heart” tasks, and firmware flashing for that matter, in the wee hours of the day. You would end up staying wide awake for the whole night, regardless of whether the end result is positive or not.

On a lighter note, it appears that it’s impossible for Galaxy S to end up as brick. Not unless you literally make it to be so.