It looks like I’m getting a hang of developing applets for PointUI. After making my first .UI calendar applet, my mind was toying with the idea of creating my own “Home” applet for .UI Home2. Since I’m creating a Home2 Home, I have decided to name it as Home Cube. 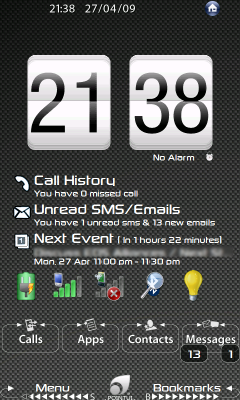 One of the things I had wanted to include is a better flip clock animation. Coding was rather straight forward, although graphic wise it was abit of challenge and in the end, I decided to reuse the graphics rendered by the original Flipclock applet developer.

The other feature I like to include in the Home applet is the ability to provide a quick glance of the various system resource status, such as phone signal, and battery level.  This would enable me to set “full screen” mode in Home2. Instead of writing individual piece of codes for each system control, I have decided to build classes so that I can reuse for every system control that I would like to track.  One new idea I have brought to this applet, is the concept of “Icon Ribbon”. This enables one to scroll through a row of system icons, even if the screen could not hold all these icons within a single row. The end result is a scrollable “Icon Ribbon” as shown in the video below.

More work is required to polish up the applet before it can be released to public. I just can’t wait for weekend to come 🙂