It has been more than a month since I bought my Lumia 920 Windows Phone. (I did had two weeks of break to have a hands on on the new Sony Xperia Z, more on that later).

Instead of the usual review, i tweet about my takeaway of the phone as I use it. Total of 12 key takeaways (see below of the details), 7 minuses, 4 pluses and 1 neutral view. While it might look like a very ‘negative phone’ to use, two of the pluses are big pluses for me. The office and outlook capabilities, and the camera photo quality. That’s good enough for me to keep my Lumia, even though Xperia Z flirted with me for 2 weeks. What’s your take?

WindowsPhoneTake #12: feeling bored with look and feel of the interface, change the theme color and “suddenly” I have a new interface. Duh! #minusone

WindowsPhoneTake #11: Windows Phone 8 soft reset is volume-down + power button. So much for being intuitive. And best of all, all SMS doesnt work after a soft reset, and suddenly I saw a steady stream of “new” messages just to realise they are actually old messages. Turned out the date/time setting was wrong, after a soft reset. #minusone

WindowsPhoneTake #10: What was Microsoft thinking when it designs the outlook mail functionalities? I can only attach photos and not documents? Please tell me my eyes is “stuck with stamps” #minusone

WindowsPhoneTake #9: Bing still can’t make it. Not only it does not do a good job searching with location context, it returns result with the news that are days olds, and in one instance 4 months old, as their top/first result. Its quite disappointing that other than a colorful search page, there isn’t much improvement since it first attempt to seriously challenge Google. #minusone

WindowsPhoneTake #8: (thisisprobablyanokiatake) Nokia Carl Zeiss lens does not just wow me with its big f2 aperture lens (which gives a very nice dof and bokeh) but also its flash capability. I always avoid flash photography especially with pns camera, but Lumia 920 seems to have good algorithm to avoid over exposure which created harsh lighting. With bulb mode in videography, you no longer take silhouettes when you are in an indoor party hall. Coupled with the impressive Windows photo sharing capability, Facebook and Instagram should invest their resources on this platform, if they are evaluation their next strategic step. You would wonder what had Microsoft been doing given the elementary abilities of these two social networking apps in Windows Phone. #plusone

WindowsPhoneTake #7: I lamented about the lack of apps, perhaps it is because the store has not completed its renovation so they are not ready to sell more apps? While I am just being sarcastic here, the fact is Microsoft seems to be doing little to make its store as friendly as its competitors. First off, there’s no way for me to tell if I have installed or purchased the app, until I click the app itself. I can’t contact the app developer, unless I install the app and hope that the app has some contact informatiln about the developer. As a matter of fact, I had some problem with an app, there was no way I could contact that developer because he used dummy email address! Windows phone support site was cumbersome process and it took me awhile before I can get the billing team to reverse the billing. In google, the moment I find the app is defective I can ask for refund immediately. Store in Microsoft is nothing just a place to download app and nothing more. #minusone

WindowsPhoneTake #6: Internet surfing on Windows Phone is so fast, that it is almost a saving grace for the lack of internet connected apps, like posb/dbs, Facebook (yes, the official one is useless), etc. I suspect Microsoft has put 90% of their r&d resources to engineer a near perfect data connectivity and page rendering capability. Of course I am just joking but kudos to the product team in this regards. But people should remember that app is still the king to make or break the experience. #plusone

WindowsPhoneTake #5: Live tiles concept is good, but at the moment it is nothing more than expandable square icons with notification counts, something you already see if Apple and Android (albeit not expandable). I would love to see tiles like scrolling marquees, that flips random or latest messages (or related notification message). #noplusorminus

WindowsPhoneTake #4: While I mentioned that Microsoft “cheats” in its claim of blazingly fast photo upload feature, it is still an amazing experience because most of the people probably care less about resolution when they upload to Facebook. I was impressed when the phone took less than a minute to upload a 1 min video to Facebook! #plusone

WindowsPhoneTake #3: (thiscouldbejustnokia) phone signal band switching (e.g 4g to 3g) seems to be lagging, and can take up as long as 5 minutes just to find the next available band. #minusone

WindowsPhoneTake #2: The geomapping feature is clearly at infancy stage otherwise we would have a Bing map app to compete with Google map app. It didn’t help that the market store has no established navigation app like Garmin, Tomtom or Sygic. Oh wait, it has Navigon (but not for this part of the world) and it costs an arm! Nokia drive+, is slick but very elementary in its features and map coverage. Its recommended route always attempt to bypass highway for some weird reason, and you have no choice between fastest or shortest route. The most ironical part is I had to use Google map to locate my destination, and enter the street address in Nokia drive+. #MinusOne

WindowsPhoneTake #1: the ability to manage your work documents and productivity (appointment scheduling, etc) is definitely the most robust and rounded feature I have come across so far. #plusone

I have recently picked up the interest in macro photography. It is always amazing to find out the details you can uncover from the small little subjects vis-a-vis what you see with your naked eyes.

My main issue right now (other than focusing) is lighting. I got a ring flash but it creates undesirable light artifacts like the one above. The two white ring reflection on the tiger beetle’s eyes make them look like a pair of spectacles! So I figure that if I intend to further pursue macro photograghy, I need to fix the lighting issue. DIY flash diffuser came to my mind, and I went google for ideas.

I started with aluminium disposable containers (as the diffuser hood) but realise later its a bad idea, since they are filmsy and would not be friendly to my camera lens body, especially if I were to rest it on the lens. I decide to build a diffuser using cardboard. So I take a piece of paper, start drawing out the dimension of the diffuser hood and the angle it should be tilting downward.

The end product of my DIY diffuser

The drawing is straight forward, it is really the piecing all the puzzles together that took me some time. Here’s a quick summary of my DIY steps for anybody who’s interested to follow; 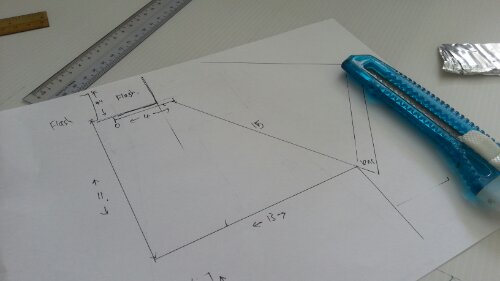 Step 1. Draw out your diffuser dimension on a piece of paper. Take note of the length of your lens that you will be using, and the position of your flashgun. You don’t want your diffuser to point at your lens instead of your photography subject, do you? 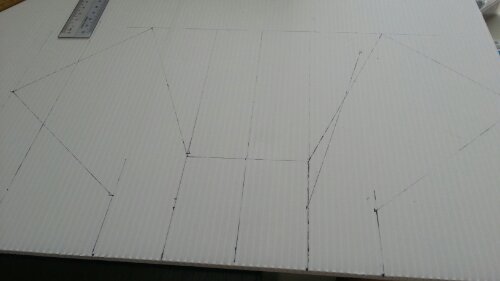 Step 2. Map the drawing onto the cardboard. In this step, I am only designing the top and side of the diffuser hood. 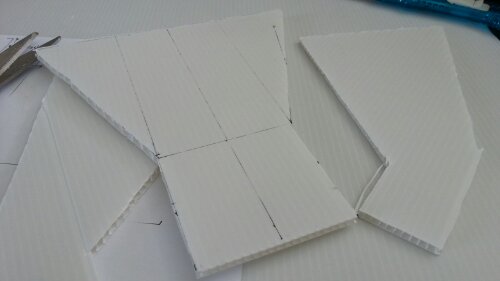 Step 3. Cut out the cardboard with your pen knife.

Step 4. Use an adhesive tape to secure the edges of the cut cardboard as illustrated. Would suggest that you tap the top and under side for more secure holding.

Step 5. Tape the top side of the holder as explained earlier. 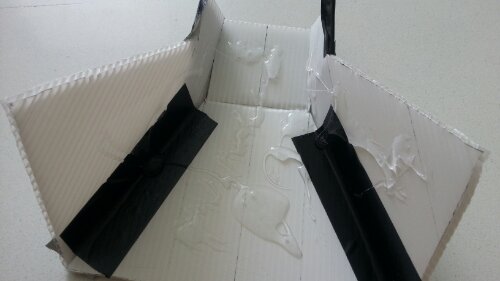 Step 6. The underside of the diffuser hood will need to be shiny for better light transfer from the flashgun to the subject. To do that, I first apply an even patch of craft glue over the cardboard.

Step 7. Overlay a sheet of aluminium foil (those you use for barbecue or oven cooking) on the cardboard. Lightly press the foil on the cardboard so that it sticks on it permanently. Be careful not to press too hard as the thin foil may break. Trim off the residue sheet. 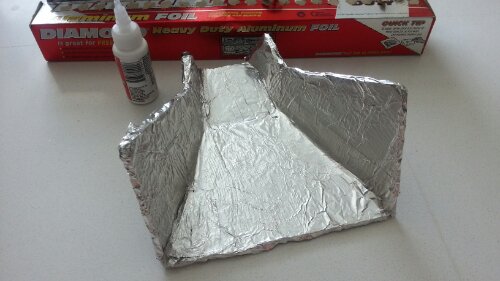 Step 8. Once you trim off the aluminium foil, the top diffuser section will look like this. Now it’s time to make the bottom section of the diffuser to complete the work. 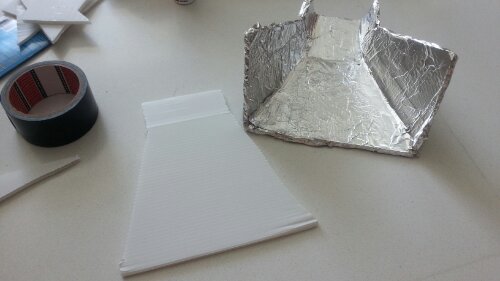 Step 9. Cut out the shape of the bottom section and pply the aluminium foil over it like you have done in previous step. Stick it to the top diffuser hood with the help of adhesive tape again. 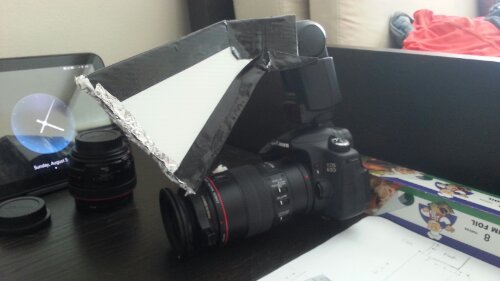 Step 10. Before you do a black tape over the diffuser, try out your DIY hood on your flashgun to make sure it can fit properly.

Step 11. Put the black duct tape around the diffuser so that it’s all covered up. This is purely cosmetic so you can skip this step if you just want a functional diffuser.

The last two steps is to put a diffuser screen on  it. I plan to cut out the milk bottle (which is translucent  and colour-less casting) but found out that the one I have is too small to be fitted on this diffuser. So I am using a temporary one ( I use kitchen paper towel instead). Will post the result of the DIY diffuser once I have taken some test shots indoor and outdoor.

Update: There’s no insect for me to experiment, so I use the 福禄寿 as my model to try out my DIY diffuser. Top one with the DIY diffuser, and bottom without.

Result of the experimenting with DIY diffuser