Having tasted my first real Android experience in the mold of HTC Desire, I had another opportunity to lay my hands on Samsung’s new Android flagship product, Galaxy S. I am not sure what does the “S” means, but one cannot be faulted for assuming it is  Galaxy “Supreme”, based on its technical specification, and my initial impression of the phone. 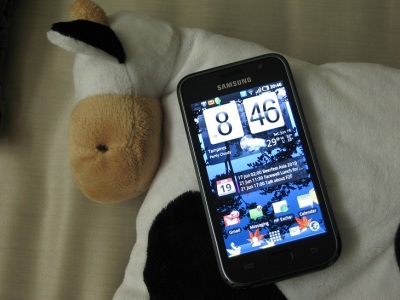 In my short 20 minutes hands on, I was deeply impressed by its form factor and its captivating Super Active-Matrix Organic Light Emitting Diode (Super AMOLED) screen. First of all, it’s thin with a 4″ wide screen, a size that I feel more comfortable after having used to HTC HD and HTC HD2, which have screen size of 3.8″ and 4.3″ respectively. I just find the 3.7″ screen in the HTC Desire, a tad too small for me.  The Galaxy S has  just the right size, and to top it all, it is only 9.9mm slim and weighs only 118g. My only gripe is its piano-finishing battery cover, which is going to be a fingerprint magnet. The fact that the battery cover is made of polyurethanes material, doesn’t make it any more “cheap plasticky”, as I thought the overall build quality is solid.

Now the screen; it looks  stunning to the naked eyes, but once I put it side by side against HTC Desire, with the brightness level maximised for both devices, I find the difference is marginal, if any. I suspect the main reason behind this nano difference, is Samsung’s decision to maintain similiar brightness level, so as to maximize the power consumption efficiency. Afterall, a Super AMOLED screen is statistically capable of achieving 20% better brightness at 20% lesser power consumption level, in comparison to a AMOLED screen.  So if Galaxy S is designed and manufactured at the same brightness specification  as the AMOLED screen, then mathematically one can achieve 33% reduction in the power consumption. Not bad!  (Note: I did observed that the power consumption in Galaxy S much better than that in Desire. It’s not scientifically proven though that it is due to the above mentioned theory, but if anybody can confirm that, please let me know)

In the end, the brief experience was enough to lure me into the Samsung Galaxy S camp. So I got a set a few days later, and begin my Android journey, ehm,  officially. Afterall, the HTC Desire is technically a “T-loan” unit from yeez, and my other Android experience was really Android Cupcake half baked into my old HTC HD. 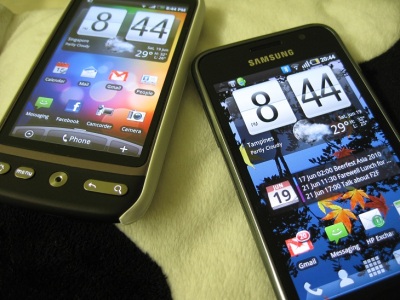 Having used the phone for the last few days, my conclusion of Galaxy S and Desire comparison is basically  hardware versus software. It is without a shadow of doubt that Galaxy S just shines in almost every aspect of hardware departments, except maybe the flash-less camera (and if I want to be nitpick, lack of LED notification light). I can however forgive the lack of flash, for its superb video taking capability. On paper, it can take 720p video at 30 frame per seconds,  but what counts at the end of the day is the actual quality of the video captured in reality. And I have to say it is almighty impressive, as it  could take a good video without any ghosting effect. Probably the best video capture capability I have come across for a smart phone.

Now, when it comes to software arena, HTC Desire is the clear winner by a mile. HTC sense  and its  home screen widgets,  spice up the otherwise default boring android home screen. One can draw the similarity from the  Windows Mobile devices; that without the Windows Mobile version of HTC sense, it is ladened by a functional but very dated Today screen. HTC has established itself as a smartphone leader, not because of its superior hardware specification, but its ability to mate the hardware and software (regardless of Android or Windows Mobile platform) to address the different needs of various mobile market segments. Samsung, on the other hand, has tried too hard to emulate iPhone, loosing it s own DNA. Its  TouchWiz user interface and the bubble style conversation for text messagin, are just some examples of that. Thankfully, there are applications like  LauncherPro, which can reinstate the iPhone wannabe back to the real android Galaxy S where it should be.

49 thoughts on “Galaxy is surreally desirable”